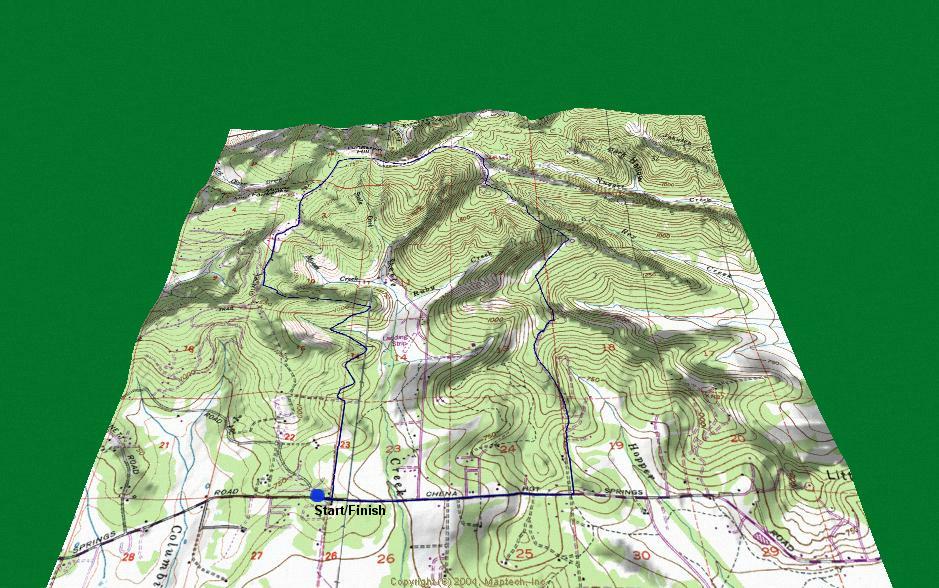 Elevation profile
Download GPX track -- right click and choose "Save Target As..."
Note that this GPX track is ridden in reverse of what's described and instead of descending all the way down Amanita, it takes a four-wheeler trail that starts about a third a mile down Amanita, and exits on Esro Road.<

This is a short, fun little ride, if you're in shape for it; a gnarly, grungy torture test if you're not.  The total distance is about 16 miles and there is about 3000 feet of elevation gain.  A determined rider or group of riders could easily complete this ride in well under two hours but most people take between two and a half to three hours to complete it.  If you want to go slow and mellow, it'll take you more than three hours, fast and furious, under two.

Start at the Pipeline crossing on Chena Hot Springs Road.  It's at about 3.5 Mile CHSR and is just before the intersection with Steele Creek Road.  There is a large parking area on the north side of the road, where the Pipeline goes under the road.  Park here and ride east on CHSR for about 2.1 miles or so until you get to Amanita Road.  This is where the fun begins.  The road goes up, and up, and up, and up for the next three or four miles or so.  At about 2.75 miles into the ride, the road forks.  Take the right fork.  At a little over 3 miles into the ride, the road forks again, take the left fork here.  There is one other fork in the road, at around 4 miles or so into the ride where you take the left fork again (the right fork is Abbey Road) and keep on climbing up and up.

Eventually, you come up to a little clearing, where the road becomes a double-track accessible to 4-wheelers and 4WD vehicles.  Stop here, rest up and then drop downhill for a bit.  Very shortly after you start down this descent, the trail forks.  Take the left (uphill) fork (I have never taken the right fork that goes downhill so I have no idea where it ends up) and begin a quarter-mile climb uphill.  The double-track has lots of deep ruts, gullies, roots, etc. that make for a gnarly climb.  If you're in shape, it is climbable all the way to the top, if not, you'll have to walk up to the top.  If it is early in the season and/or it's been raining recently, this trail gets extremely muddy and slippery and not quite as much fun as when it is dry.  If it is a wet year, you can count on pushing your bike up this hill.

Eventually, this double-track tops out along the ridge where you come to a three-way intersection.  Turn left here (I haven't ever taken either of the other trails, the one going straight on ahead and the one going to the right, but they are pretty obviously not used as much as the trail going off to the left) and go downhill.  This trail drops right down the hill for about a third of a mile before bottoming out.  Be warned: if you're confident in your bike handling abilities, you can descend down this hill at some speed.  However, if you're at all not sure of your bike handling skills, take this hill nice and slow and mellow.  There are deep ruts, ravines, gullies, etc. here that can easily eat your bike and give you a nasty spill if you're not careful.

The trail bottoms out at the saddle of the ridge, then starts climbing back up again.  It comes up to a berm, which you can ride over if you know what you're doing but is better to take the detour around to the left if you don't know what you're doing.  The trail continues on uphill for a bit before coming to an access road.  Take the road out to where it intersects with a big, wide road.  Turn right here and descend down to the intersection with Gilmore Trail.  Stop here, rest up, then turn left at Gilmore Trail and stay on it.  Your are now on the course the Death Ride takes.  There are cars out here, so don't hog the road.  After the first hill you climb here, you will see a double-track heading off to the north (right) which is where the Pipeline Viewpoint ride goes.

(Note: the following paragraph is now somewhat out of date because as of the summer of 2007 there is a new subdivision road being built through the course of the Rabbit Trail.  However, the course of the ride hasn't changed, you just need to follow this road over to where it connects up with the Hubernite Trail)

Eventually, you come out on the pavement at the end of Gilmore Trail.  You have one little hill to climb, then it's downhill for a couple miles or so.  Just after you pass the intersection with Goldmine Trail (a subdivision road), there is a road to your left called Hubernite.  Turn left here and GO STRAIGHT INTO THE WOODS.  Just ride right on straight into the Rabbit Trail and follow it for a little while.  You can ride most of it, but it is just as easy to get off your bike and walk most of it.  It goes into the woods for a while, takes an uphill jog, then straightens out and finally descends down to the intersection with Hubernite Trail.

Stop here, take a breather if you'd like then turn left.  You then head down Hubernite until it becomes a subdivision road.  Be warned: Hubernite Trail should not be descended at great speed.  This trail is open to traffic and if you go down this trail into the subdivision road at speed, you could very easily end up being someone's hood ornament.  The road you're now on is called Tungsten.  It drops down and jogs to the left, where you have to make one last, little climb up to Powellite.  The condition of Tungsten Road can vary from year to year and within a season.  Sometimes there are nasty washboards in the road and/or it can have some pretty large rocks.

When you get to Powellite, you can turn right here and take a trail up along a section line over to Juniper.  I haven't ever done that trail however I understand it's a minor variation on what we used to do here.  We used to go to the end of Powellite to a trail in the woods and then take another trail down to Juniper.  Then some guy built a house right in the middle of the trail.  The trail now routes around a section line.

Anyway, you can also take the faster ride down Tungsten to where it intersects with Juniper.  Bear right, ride up a couple little hills, and very shortly you are back on Chena Hot Springs Road.  Turn right and your car is parked a couple hundred feet away.  Congratulations!  You have successfully completed the Amanita Ride!