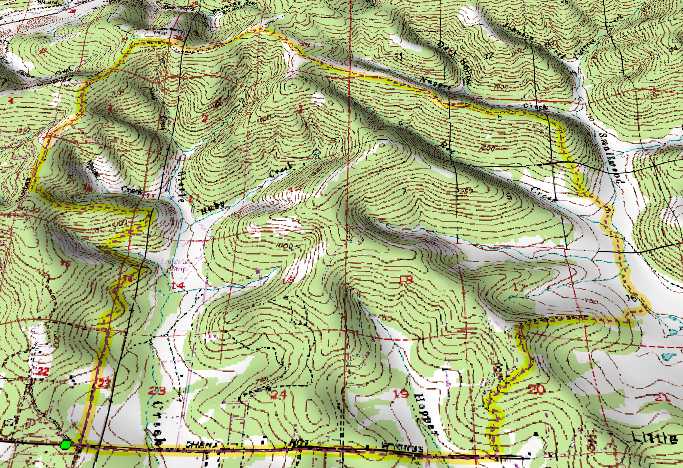 Note that the tracks above are ridden in reverse of the description below. Riding the course reverse of what is described is definitely better...

What a ridiculous ride.
That's almost everyone's opinion of the Death Ride. Scoped out and popularized by Doug Burnside, the Death Ride is a silly ride, involving thigh deep water and mud hazards, pushing or carrying the bicycle beside you as you traverse the Smallwood swamp. It is also a lot of fun. There's never been any fatalities, but in 2002 there was a drowning hazard on the course. In the middle of the 4-wheeler trail there was a water filled sink-hole deep enough to swallow a person and bicycle. The hole managed to eat four or five people until we decided it would be better to go around it. Probably the silliest thing about the Death Ride is that not only do people keep doing it every year, a bunch do it twice a year -- once as a ride, to mark the course, and once as a race the following Sunday.  If you really wanted to, you could probably do this ride in two hours or less, but there's really no reason to knock yourself out trying. Most people take three hours or more to complete it and if you want to go slow and mellow, you can do it in around four hours. There is nearly 3000 feet of elevation gain on this ride and it is just under 20 miles in length.

Starting at the Steele Creek intersection on Chena Hot Springs Road, ride east for about 3.2 miles.  You can either ride along the shoulder of the road or take a gravel path that parallels it. You turn north (uphill) on Smallwood Trail. Ride all the way up to the top of Smallwood. There's a false top partway up, so don't celebrate until you are there. Be forewarned: there is frequent traffic coming up the road that you are about to descend, so play it safe. Stick to the right, don't go top speed, live to ride another day. The condition of this road varies from year to year and even within one season.  There are several gullies, Cat tracks, dusty patches, rutty sections, etc. that increase the danger level. Ride all the way down until the road finally turns into double track. You'll know you are on the right path if you have to do a stream crossing or two.

For the next two miles, things just keep getting wetter and messier. Just stay on the trail, and don't even bother trying to keep your feet dry. If it is a fairly dry year, you can generally get across the swamp reasonably quickly. If it is a wet year, you will be slogging for a while. If you get lost or start wondering where you are, just look for the frayed, tattered, weathered remnants of Death Ride pin flags of years past. The thing to do is plunge in right away and get it over with. Plod, plod, plod. Finally, you make your last stream crossing (and get this -- there's a plank bridge across it, as though you care at this point) and end up on a wide gravel pad. This is someone's mining claim area. Take a minute to pick all the grass and gunk out of your drive train, and lube up to avoid chain-suck.

Follow the road away from the gravel pad. There are a couple of turns off to your right -- ignore them and stay on the main trail that goes UP. You have a fairly brutal climb at this point. Only the very strongest riders can ride all the way up to the the top of this hill.  Most folks don't ride all the way up, and the ones that do aren't sure that it was worth it. After you top out on the climb, take a breather. There's more work to do. The next four or five miles are a gentle uphill climb, with a few descents and steep climbs for spice. Stay on the main trail. Eventually, you encounter a wide, open intersection. This is where the Amanita Climb joins up with this ride. Go straight. This puts you on Gilmore Trail, the dirt part of it. Don't hog the road, there are cars out here.

Staying on the main road, you pass a few intersecting trails and roads, eventually round a corner and end up on pavement. Ride the pavement for about two and a half miles. After you pass Gold Mine Trail, be on the lookout for North Hubernite, on your left. Enter N. Hubernite and veer right, and take the next left, and dirt road that drops downhill. There used to be a trail here but it got creamed when the road went in. You'll connect with an old access road, which becomes a dirt road. Go down, past some homes. When in doubt, don't turn, favor the straight path. You'll make a long, scorching descent (watch out for cars) and then slow down in order to make the sharp left-hand corner at the bottom. Climb up the hill, then turn right onto Powellite.

Ride up Powellite, and when it finally ends in a T intersection, go left. Ride about 200 feet and find a trail that drops down to the left. It's a well used four-wheeler trail, easy to find. At the bottom (one last bit of wet), you hook up with Juniper and go right. All you do now is follow the road. Ride up a hill, down the other side, and up a mellow climb to the finish, where your car is hopefully parked, just a short ways away.

Oh, I should have mentioned that you shouldn't do this too early -- wait until the end of May, at least. Also, you should have brought lots of mosquito repellent. Sorry about that.