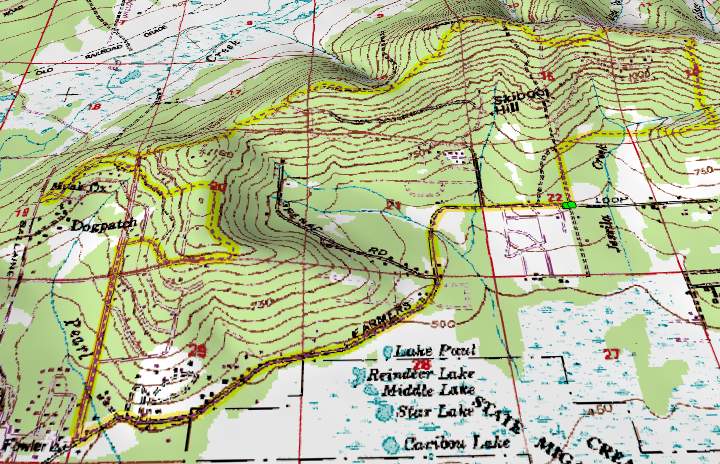 This is an excellent little ride that is maybe fifteen or twenty minutes from downtown Fairbanks.  It is a fairly short ride (12 to 14 miles, depending on which version you do) and takes about three hours to complete at a leisurely pace.  A determined rider or group of riders could complete this ride (both versions) in under two hours.  This is the very first ride I discovered on my own when I first started seriously getting into mountain biking (1997) and it is far and away my favourite ride of all.

This is also an excellent training ride for those new to the sport who don't feel like driving halfway to Chena Hot Springs or all the way out to Cleary Summit or wherever.  This ride has a little of everything, from boring, flat paved bike paths and roads to grueling ascents to rooty, technical trails, to really cool descents (including one that drops off behind Summit Drive that is very rooty, bumpy, technical and rivals the Alder Tube on Ester Dome for degree of difficulty).

NOTE: this ride description differs very slighty from that which is mapped as well as from the second version of this ride.  In essence, the only difference between this one and the second version (that we mapped as an informal recreational ride on a lazy Sunday afternoon in August) is that this ride follows Farmer's Loop and therefore includes more pavement that the other version.  This version of the ride was done as a Tuesday Night ride in May of 2002.

Start at the Dog Musher's Hall on Farmer's Loop.  Ride out toward the University for three miles until you get to Auburn Drive.  Along the way, you will pass by Ski Boot Hill Road. This is the route the second version of this ride takes.  Turn right at Auburn and follow it up the hill to the end (about 1.25 miles) past the elementary school until it becomes Wolverine Lane.  Take Wolverine up the hill (a fairly short, but grueling little climb).  Along the way, take note of a trail going off to the left.  This is one of the trails that makes up the Skarland Ski Trail System and is also part of the second version of this ride.  Keep on going up Wolverine and over the ridge until you get to Merlin Lane.  Turn left.  Follow Merlin to where it dead-ends (along the way, you will pass Rocky Reifenstuhl's house) and then you pick up a trail that parallels the ridgeline.

Follow this trail for about a half mile or so to a four-way intersection.  Going straight ahead takes you over to a power line and on up to the KUAC tower (which is where you will be going in due time).  Turning right takes you down a steep descent that puts you out on Grenac Road.  In the fall, you can see Farmer's Loop and the Dog Musher's Hall from this point.  You want to go left.  This takes you up over the ridge and down the other side where you come to another four-way intersection.  Going straight ahead takes you on down to Red Fox Drive. Turning left takes you back over to Wolverine Lane (remember that trail you saw going off to the left as you climbed that brutal little ascent?)  Turn right at this intersection and take follow this ski trail as it wends and winds along the ridge, behind houses, backyards, etc., crosses a power line and a couple of little gullies before it finally comes out at the intersection of Ballaine Road and the Red Fox/Eldorado intersection.

NOTE: this part of the ride is very bumpy, rooty, and somewhat technical.  You will appreciate your full suspension if you have one!  You can get by without one, but a full suspension is a nice thing to have here.

The trail crosses Red Fox, winds through the woods for a little bit more, then comes out at the top of Ballaine Hill.  Ride over to the Red Fox/Eldorado intersection.  Take Eldorado on up the hill.  It starts out flat, and when it starts on up the hill (a grinding little climb, I might add) it then becomes Moose Trail (a well maintained gravel road, as is Eldorado).  Follow this road up the hill to the end (about a mile or so) and just past Meadow Mouse Lane, it ends at two driveways.  Take the right one and very shortly, it puts you out on that same trail you left at the first four-way intersection, which is roughly a half mile from where you are now.

Take this trail through the woods, cross a powerline (where the second version of this ride comes up), and begin a gentle ascent up through the woods until you get to the KUAC tower access road.  If you need to drop out, you can bail here by taking this road all the way back to Farmer's Loop.  You can take the road (a gravel road) or a wide single-track that parallels it to the left on up to the tower and beyond.  When you get to the tower, keep going in an easterly direction.  You will go back through the woods along a double track then come out in a clearing.  Follow the double track as it goes down the hill to the right of this clearing (you will see what I mean when you see it). This drops down the hill for a ways, past several deep puddles and ruts.

This double track forks just before the saddle of the ridge.  Take the right fork! (the left fork is described here ).  This drops down into the saddle of the ridge, then starts back up in a tough, little grind of about 300 feet of elevation gain.  Fairly shortly, it tops out on subdivision roads at the top of the ridge.  From here you can see Farmer's Loop, Fairbanks, the Alaska Range, some of Goldstream Valley, etc.  Take the subdivision road (I believe it is called Mia Street) to Noel Drive and turn right to Cranberry Ridge Road where you go down the hill to the left in a fast little descent.  At the first switchback (if you keep going down Cranberry it eventually comes out on Summit Drive), take the new subdivision road back up the hill to the end of Skyline.  From here you have a commanding view of Goldstream Valley, the Tanana Valley, the Alaska Range, etc.

Follow Skyline all the way over to the intersection of Summit Drive.  You have now done basically all of the climbing on this ride.  Turn right at Summit, drop down for a little bit, then pick up a trail that goes straight down the hill (this is the technical descent I mentioned earlier that rivals the Alder Tube). It is right behind a new (as of 2001) very large, wooden frame house.  Follow this trail down the hill almost all the way to a ravine.  This is where this description differs from the map.  If you continue on up the other side of the ravine, you have to turn right and come out by a person's house (you come out on his driveway).  Unless you are FCC and this is on an FCC-approved event (such as a Tuesday Night ride), DO NOT go up the other side of the ravine!  Unless you are Tom Clark or some other really strong rider, you will have to push your bike up this hill, so it is best to avoid it anyway.

There is a little trail that takes off to the right just before you get to the ravine.  Take that and it comes out at the end of Senate Loop.  Then it is just a matter of following Senate over to Summit where you can take a cool little trail alongside Summit that comes out right at the end where Summit intersects Farmer's Loop.  Cross the road and back to the parking and your car (and your post-ride goodies?) await.  Congratulations!  You have completed the Skyline Cyclocross!