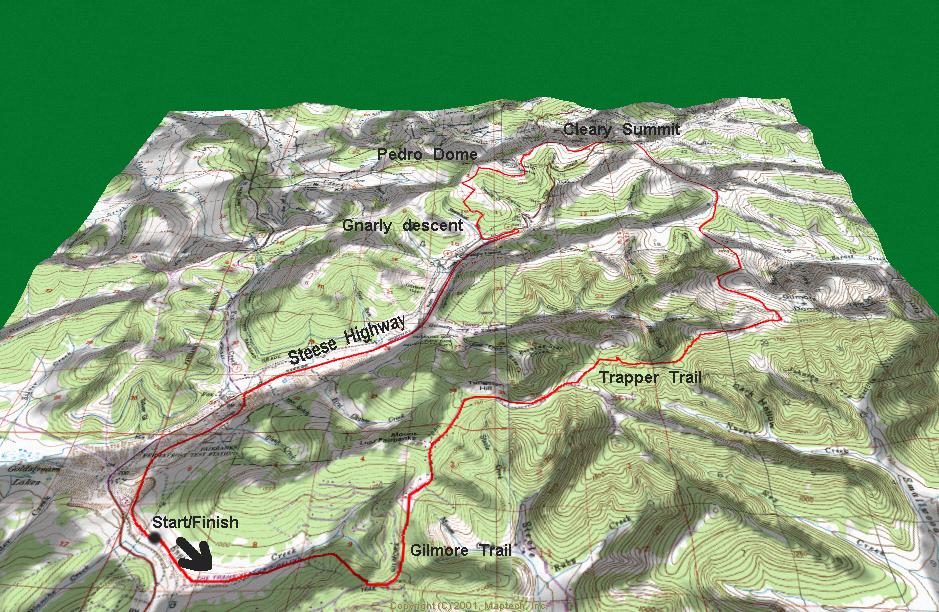 This is a slightly different version of the Pedros Revenge (Long) Loop described elsewhere in this section.  The chief difference (aside from length, which is essentially nil between the two rides) is one of difficulty.  This ride descends down the double-track behind Pedros Monument.  This ride is a tad over 31 miles long and there is somewhere around 4,000 feet of elevation gain in the course of this ride.  A determined rider or group of riders might (I emphasize the "might" there for reasons that should be fairly obvious shortly), just might finish this ride in under 3 hours, but most people take between 4 to 6 hours all told to complete it, depending on which version they are doing,   This can be a long, taxing, grueling endurance fest so be prepared.  Bring lots of water (especially if it is a hot day!) and a fair amount of food and/or energy bars.  You will need both.  Also, this is NOT a ride you want to take a beginning rider on!

You start at the turnout on the Steese Highway where the Pipeline goes right by it and there's an Alyeska tourist shop there.  Ride east (away from town) on the dirt road there and start heading on up the hill.  You'll climb a couple little hills, then a pretty big one, before you top out at Gilmore Trail, a paved road.  Take any of the little connector trails to Gilmore Trail and there you are.  Turn left here and start climbing up and up for a couple miles or so.  You come up to a little hill (called Mount Lulu Fairbanks on the maps) and Gilmore Trail drops down. At the bottom of the hill, the pavement essentially ends and there is a turnout and a "State Maintainance Ends" sign.  Keep on going uphill on the dirt portion of Gilmore Trail.

You follow this dirt road for a couple miles or so and at roughly 7 miles into the ride, you will come to a double-track going off to the left (northeast).  This is the Trapper Trail.  Turn left here and head out on this trail.  It is essentially a 4-wheeler road now, so watch for traffic from ATV's and 4-wheel drive vehicles!  This double-track is level for the first quarter-mile or so, then drops down and winds and wends along for a little while. It generally has several deep ruts, puddles, and erosional gullies here and there.  It bottoms out before coming to a little hill.  You have two choices here.  You can either go left (the longer way) around this hill or right (the shorter way) straight up this hill.  The left track is described in the other version of this ride.  The right track is what is mapped and described here.

This trail goes straight up the hill and can be climbed (in granny gear) by a determined rider right up to the very top, if you're really, really into machoistic displays of stamina.  You top out by a rocky viewpoint.  Stop here, take in the expansive view of the Tanana Valley, and then keep on going down the hill on the other side.  The trail drops down, levels off, then climbs up a little incline and comes out on a road at a T-intersection.  Going right takes you to some radio antennas (which you should NOT do) so you can only go left.  You drop down a bit, come around a bend, and then perhaps 2/10ths of a mile or so where you came in on this road, there is another road going off to the right.  Take this one (you can't continue down on the road you're on anyways because it's now blocked off with fences and large "No Tresspassing" signs, which you should NOT ignore!) and start climbing up another hill.  The road levels off before coming up around another little radio antenna.  You skirt around it to the left and drop down into a powerline.

Follow this powerline, first straight, then to the left.  It drops down a quick descent before it comes out at a little clearing.  There is a double-track going off to the right.  Take this double-track and start climbing up the hill.  Off to your right, you will see the Fort Knox Gold mine through the trees.  This double-track comes out on Fort Knox Gold Mine road.  Turn left here.  Technically, you're not supposed to do this (because this part of the road is closed to the public) but you don't have much of a choice.  Follow this road up and out.  After a couple hundred feet or so, you'll see signs aimed the other direction announcing that this road is not for public access.  You're now free and clear (the trail you came out on is about 300 feet or so past the point where the road is closed to the public) and it's now smooth sailing all the way over to Cleary Summit.  Right to the ride, avoid the big ore trucks, and ride down to Cleary Summit, a few miles away.

Cross the Steese Highway here and climb up the subdivision road on the other side.  Follow it for a mile or so until it comes into the True North mine road.  Turn right and follow this road for another mile or so to the first left (NOTE: as of July, 2005, there are no ore trucks coming and going from the True North mine, however if that changes in the meantime, BE CAREFUL to avoid these trucks at all costs!  These are BIG trucks and they can't stop in a hurry!) where you start up another little hill, your last hill of this climb.

Follow this road for a little bit and take the first left (the right fork goes up to the golf-ball radomes on Pedro Dome) and skirt around the summit of Pedro Dome.  Follow this road for a couple miles or so until you come to a little double-track dropping steeply off to the left.  If you pass this turnoff, you will eventually end up at the True North mine site.

Take this double-track down a fast, somewhat technical descent that has lots of gullies, ravines, ruts, etc. that will grab your bike if you're not careful.  You drop down, level off, and drop down again until you come to a T-intersection.  Going straight on ahead takes you over to the Elliott Highway, as is described in the other version of this ride.  Turn left here.  This takes you over to another road that puts you out on the infamous Pedro Monument Descent.  Follow this road down and then to the right, up a little rise to where it levels off before descending.

You are now on the aforementioned Pedro Monument Descent.  There are a couple of things about this descent you should know before attempting it.  One, this descent is EXTREMELY dangerous and not for the faint of heart.  This descent is very technical, hair-raising, and difficult.  You MUST know what you're doing in order to descend down this hill at speed!  Two, you MUST have good brakes before attempting this descent!  If your brakes crap on you when you're bombing down this hill, you'll be in a world of hurt quite a ways away from immediate help.

That said, start dropping down this hill, first straight, then down to the right a bit, then straight again before you come out at the bottom, on a road behind the Pedro Monument.  This double-track has lots of large rocks, ruts, ravines, gullies, etc. as well as tall grass in places that can hide much of same.  There are also a number of trees and brush bending in from the sides, waiting to scratch at you, so have fun with it, but be careful coming down!

Follow the road out to the monument and then turn right at the Steese Highway.  It's now about six miles or so of road riding back to your car on a gentle downhill grade that you can ride at 30 miles an hour if you're so inclined.  When you get to the Steese/Elliott intersection, turn left at the Steese and follow it all the way back to the pipeline viewpoint.