Taking on the Susitna 100 One Checkpoint at a Time 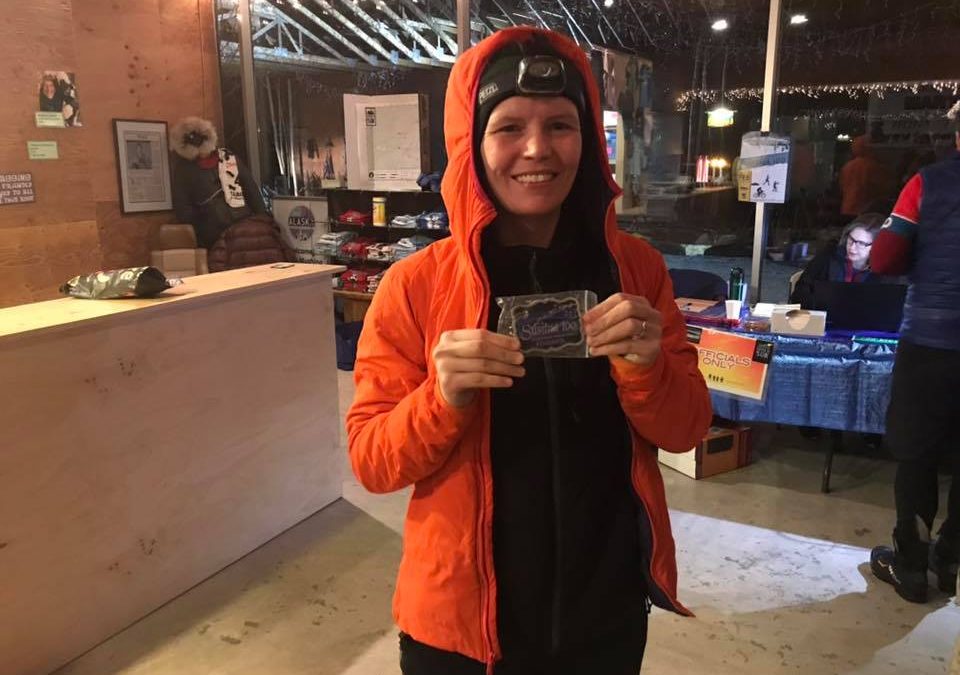 by Nikki Potter
17th overall and 3rd in women’s division

“It’s only 10 miles”. Little did I know that those words would haunt me for hours. Sitting at the check point at mile 80, I repeated those words in my head to give me comfort that this race was nearing the end. Mile 90 would be the next check point and from there the finish was within reach! Little did I know when I left the comfort of the tent at the Mile 80 check point, that those 10 miles would be the longest of the entire 100 mile race. As luck would have it, misery loves company and I spent most of those 10 miles having a pity party with another racer. I kept thinking that the race directors were playing a cruel joke and that the check point was much further than the supposed 10 miles, or maybe it just wasn’t there! I played through all kinds of scenarios in my head as I pushed, and pushed, and continued to push my bike through all the snow that had accumulated over the day. My frustration was beginning to get the best of me, when I looked over my shoulder and saw lights sneaking up behind me. The competitiveness kicked in and I got another surge of energy. Two racers (on bikes) passed me which was irritating, so I decided to stop feeling sorry for myself and kicked it into gear. Low and behold the checkpoint soon came into view. The race was almost over.

Those last 10 miles went by faster since I could actually ride. I was not riding fast, and fought my bike through  most of it, but the end was near! I passed a biker, then he passed me. With the finish line lights dancing in the distance I didn’t have the heart (or energy) to ask him to nudge over so I could pass again. I shouted words of encouragement until we pushed up the last hill and then rode the 50ft across the finish. For me that finish was 19 hours and 3 minutes after I started.

My only real goal for the Su100 was to finish. Snow was in the forecast, but it was only supposed to be 1-3″. With a hard base I didn’t think that this would be an issue. Boy, was I wrong (along with the weather folks!!)!!! Pushing my bike is a mental drain. I love riding my bike, but feel a sense of defeat when I am taking it for a walk for miles and miles. With my mind always getting the best of me, I broke the race down by checkpoints. Reaching each was a small victory. Trying to make sure I would eat at each was a chore. Passing folks gave me motivation. Podcasts kept me company when I started to think too negative. At the end of the day, I am my own worse enemy in a race. I am my strongest critic. I am stubborn and can put my head down and push on. Maybe this is what got the other 38 racers across the finish. I know that stubbornness helped me to leave the comfort of a warm lodge and my husband at the mile 63 checkpoint. Given the trail conditions, we all suffered, but I can say that so much of that dissipated when I crossed that finish line. I will never think of the saying “it is only 10 miles” in the same light. Now that the race is over, it will probably make me laugh. I also want to meet the person that named “Steve’s trail”. I hated that trail and cursed Steve the whole way. Box checked for the Su100 and onto the next adventure. Suck it up and ride on.