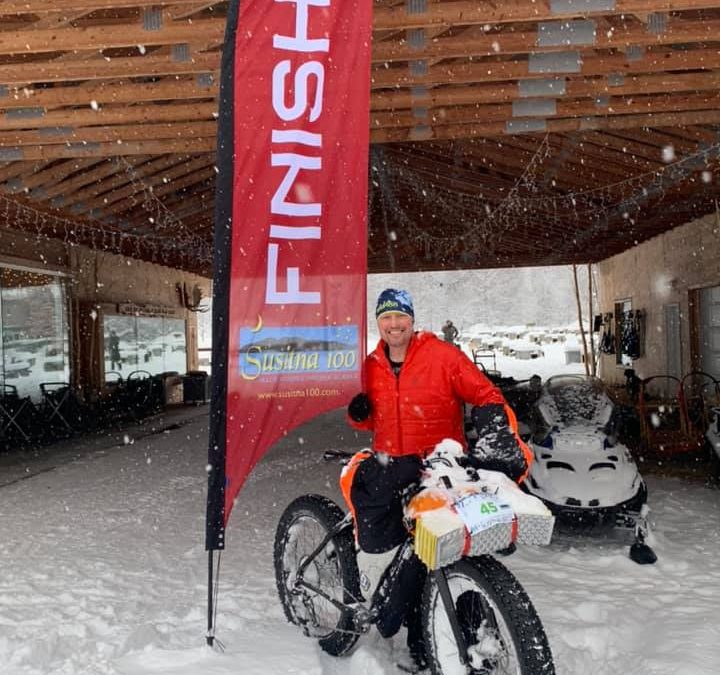 My journey to the Susitna 100 began a year ago for me when my good friend Rachael told me about her race in 2018. That’s when I decided I would ride in the SU100 in 2019! Rachael and I trained together and hosted Tuesday night Goldstream rides in preparation for the SU100. We shared an Air BnB at Big Lake and finalized our riding tactics for the SU100.

The night before the race Nikki, Ryan, Bobby, Rachael, and I got together and had pizza and beer discussing points of interest for the race. All along, laughing and joking. On the morning of the race, everyone was cool, calm and collected. It was race day! I skipped breakfast for some dumb reason. Rachael and I loaded up our bikes and headed to the start line around 0800.

At the start line, we met up with Nikki, Ryan, and Bobby. Nikki was able to get her gear checked early and pointed me in the direction of gear check-in. I was able to get my gear checked with flying colors! I was stressed that my bag would not pass inspection hence the reason I drove over to Julie’s house early Friday morning to borrow hers just in case.

Crap!!! My Garmin does something crazy! Nikki is behind me trying to get around me. Lol. Well, maybe not funny then, but we can laugh now. I think….

The race is on! The first 22 miles were awesome! Packed and Fast!!! I was passing lots of racers. I finally catch up with Nikki just before the first check point. However, my hydration pack froze up so I had to stay a little longer to unfreeze the line. Nikki takes off ahead of me. The stretch to Flathorn Lake was good, minus some wind drifts. I got in just as Nikki was leaving. I was soaking wet! It was so damn warm. I tried to dry my stuff out but opted to put on my extra gear. They had the best spaghetti EVER! I had two bowls! I left check point two alone and headed out to 5 star tent. I don’t recall much about that stretch of the race. Funny how that happens in a long race.

Eagle Quest is the next checkpoint. I don’t remember the time, but it was getting late. I was tired and truthfully was ready to quit. Again all of my gear was soaking wet. I was really hating life at this point. The last few miles were just horrible. I ran into Nikki leaving the Eagle Quest. She gave me some words of encouragement and let me know I wasn’t alone in wanting to quit. She too was exhausted. We say our final words of support and move on. That last mile into Eagle Quest was brutal, had I known the rest of my race was going to be like that I for sure would have quit! While at the Eagle Quest I ate my two slices of pizza I carried with me.  I’d like to tell ya that it was amazing, but it was frozen and not so good. Still I ate every crumb! I heard about a shop that had a wood stove in it to dry our clothes! That was heaven to my ears! I found the shop, stripped down to my bibs, and dried all of my clothes. It took almost two hours, but it was worth it. I felt like a new man.

The RACE IS BACK ON!!

I hit the trail to Cow Lake. I run into Rachael and Bobby on the trail out. Rachael looked and felt just as I had at that point. I gave her words of encouragement and told her about the shop. Bobby was looking stronger than ever! I push on alone heading towards Cow Lake. Crossing the big swamp was ridiculous. It sucked! Again I rode/walked most of this alone. I stayed at Cow Lake for a brief time and decided to head out with a group of 3. The trail started out as normal, but quickly turned to shit! We push our way into Hunter’s Den. The distance was 10 miles. It took us 5-1/2 hours! We were so tired and beat but what do you do….Quit? Not an option! We ate soup, dried our clothes, and rested. Finally, we muster enough energy to push on the last 10 miles. When I say “push” I literally mean push. The snow was so deep and the trail so soft. We took turns breaking trail and encouraging one another. It was Hell! But no one ever gave up!

When we hit the RR crossing finally we could smile. Everyone felt like we could do this. We thought we only had 3 miles left. Turns out it was closer to 6 miles. Aggggg!!! Mental exhaustion was really kicking our asses! But we pushed on step by step. And then like a beaming light out of heaven we can see the roof top of the HQ’s the finish line. Then the damn trail starts taking us away from the finish line! Why? We were second guessing ourselves. Are we lost? Did we miss a turn? Do we turn back? And then Martin Buser comes by with his dog team and yells to us “Only 1/2 Mile left!” You guys have got this! Is he crazy??? Does he know how long it takes for us to walk a 1/2 mile?!

We laugh and move on step by step, heads down, body hurting, backs screaming in pain. We could hardly stand on our feet at this point. It’s been 31 hours since the start of the race. No sleep, soaking wet, and just plain exhausted. Still we push on.

Stop! Look! Is that a car? I call out to everyone. We all squint our eyes YES! It is a car. We are almost to the parking lot! I can feel a lump in my throat. Emotions are starting to get to us. Then I saw Bobby Gillis looking like Jesus himself! I’ve never been so happy to see another man!  He’s shouting words of encouragement and support. As we start the climb up the final hill. A lady yells out “You guys can walk on the road!” I yell back the “Hell with that! We’ve been on this trail for 99 1/2 miles, we are finishing on this trail!” Someone behind asked if I was speaking for the whole group and I said, “Yes! I’m leading this pack! Let’s do this!”

We all lined up 4 cyclists abreast and crossed the finish line together with a time of 31 hours and 21 minutes. One team One Goal. Our group of 3 forever known as The White Walkers!