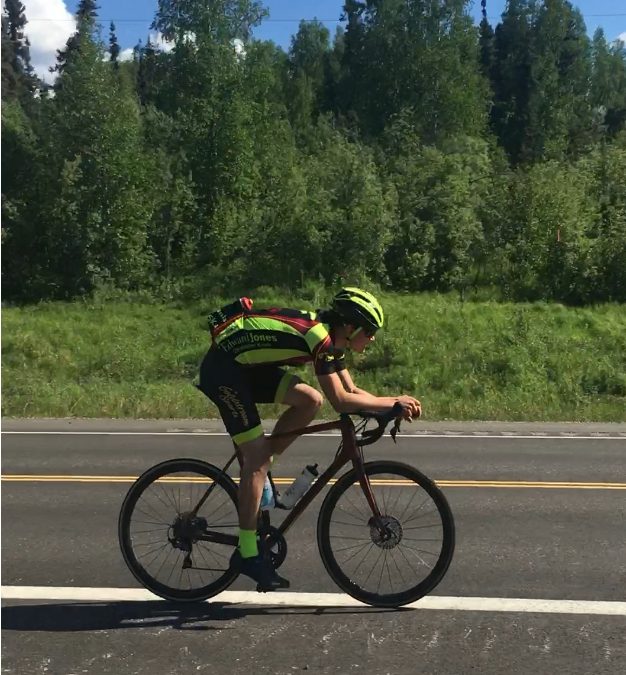 The virtual format didn’t quash the competition of the recent Tour of Fairbanks road bike race as nearly every category had a leader change during the race’s five stages.

The Fairbanks Cycle Club race was held June 4-7 with all racers required to ride by themselves, requirements put into place earlier due to the COVID-19 pandemic. Courses were set up and times recorded using the Strava app.

Even though riders raced alone they still seemed to feel the heat of close competition, especially during the last day, which included a 52-mile stage from Fox to the Wickersham Dome Trailhead and back.

The Open Men category was a real dog fight for the win. Tyson Flaharty, Davya’s husband, came into the last stage with a 21-second lead on Coleman and a 24-second lead on Luke Buth. But Coleman blitzed the Wickersham Dome course to post a 31-second win, which helped him squeak out a 10-second lead over Tyson Flaharty.

In the Open Women category, Davya Flaharty held strong and went from a solid second to take the win. She held almost 17 miles per hour on the Wickersham Dome course, which included 2,200 feet of climbing.

Christina Turman, who had been leading the category, was not able to compete in the fifth stage due to a pulled hamstring. Alisabeth Thurston Hicks, who had been in third place, took second.

The Masters/Sport Women also had a lead change. Kristin O’Brien had a great Wickersham Dome ride to overtake Anna Rix to win the overall by just 58 seconds. O’Brien came on strong the last two stages to dig into the huge lead Rix had built earlier. Alexandria Manley filled out the podium with a third-place finish.

Matt Glover dominated the Masters/Sport Men category, though Russ Brovold had a screaming time trial on the Steese Highway stage. Glover solidified his win with a six-minute victory on the Wickersham Dome stage. No other racers in the category finished all stages.

But competition wasn’t the only thing outstanding about this race. Racer Andrew Weller showed great sportsmanship. After other racers got flats on the Wickersham course Weller replaced the tubes and even donated his own to get the other racers on their way.

“He even had to call his wife to bring him more tubes after he also got a flat,” Knott said.

All results are posted on the Fairbanks Cycle Club website at: www.fairbankscycleclub.org/races/results/

Tour of Fairbanks racing will continue July 16-19 with a mountain bike version and August 27-30 with a gravel racing version. The formats will be similar in that racers will ride on their own with their results being recorded in Strava. For more information see: www.fairbankscycleclub.org/races/tour-of-fairbanks/

The FCC would like to extend a special thanks to Christopher Knott for spending many hours of volunteer time to make this Tour of Fairbanks happen amid challenging circumstances.